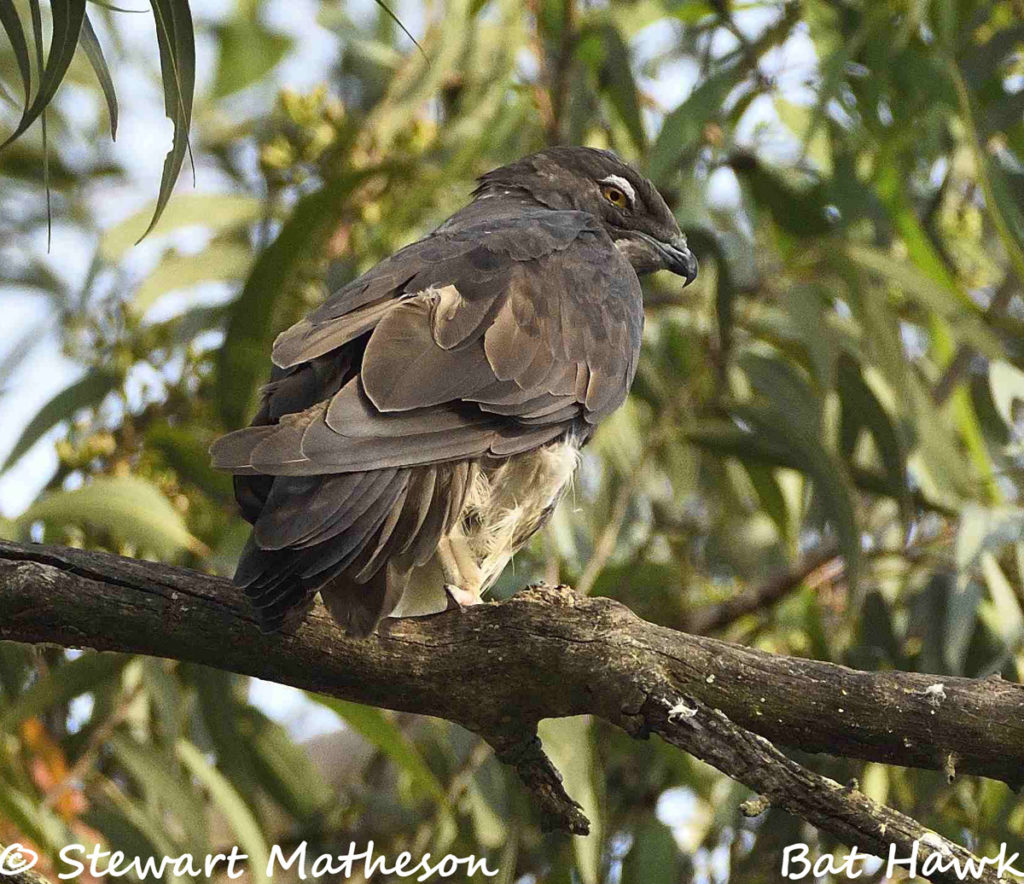 Bat Hawks are extremely specialised raptors. They are in a monotypic genus and its phylogenetic relationships are still unclear.

The Bat Hawk is largely crepuscular, being most active at dawn and dusk although they also hunt late into the night and very early morning. These birds are most active on moonlit nights.

This species is a specialist bat hunter. However, it will also feed on swallows and occasionally on other smaller birds. Bat Hawks may forage far from their nests and using a tracking device, the late Tony Harris suggested the home range of a pair of Bat Hawks to be approximately 200 km2 in the Tzaneen area of Limpopo Province.

Bat Hawks have a wide distribution in Africa and South-East Asia from Thailand to Malaysia, Indonesia and Papua New Guinea. The small differences between the Asian and African birds have resulted in taxonomists splitting them into two sub-species. In Africa, they are distributed from West Africa to Ethiopia and southwards to Namibia and Zimbabwe. In South Africa they are more common in Limpopo and Mpumalanga provinces. In KwaZulu-Natal the Bat Hawk is considered to be a vagrant. Bat Hawks are nowhere common in South Africa.

They also occur in eSwatini and in Gauteng Province but are generally scarce in these areas. The Red Data Book of Birds estimates that there may be 75-100 mature individuals in the region, but this figure has not been substantiated.

Bat Hawks are easily overlooked due to their habit of sleeping up in dense, dark foliage during the day and being active at night, dusk and dawn. They have a double eyelid, the outer one is white and clearly visible during the day when the birds are sleeping.

Bat Hawks are not easily mistaken for other raptors. Their dark, uniform plumage and distinct shape with small head, long tail and falcon-shaped wings make them stand out. The trailing edge of the secondary feathers in the wings appear jaggered and result in a very silent flight. They are fast fliers and when nesting can be quite vocal. 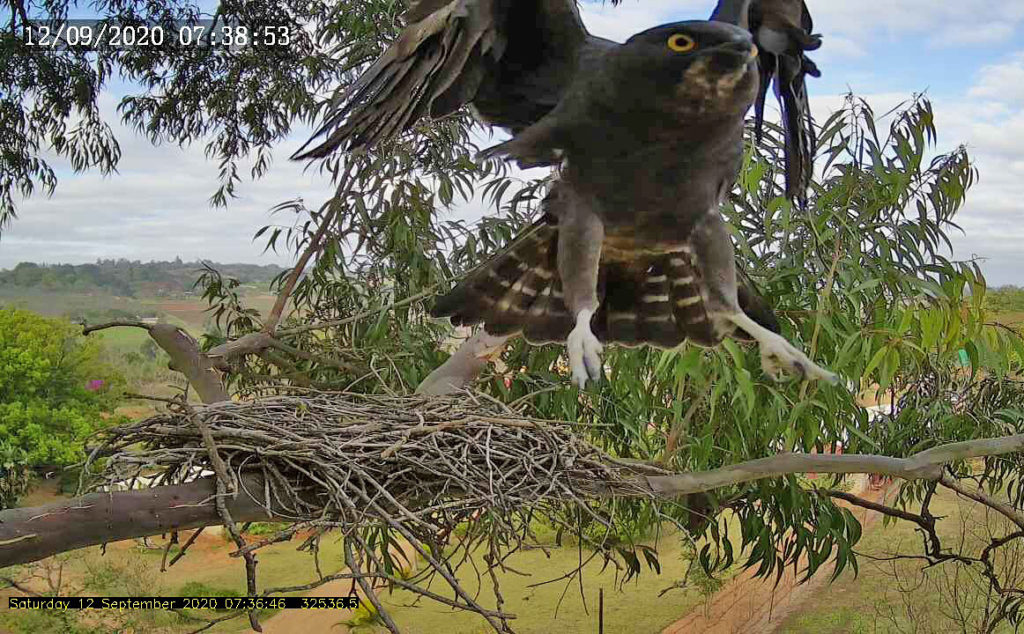 Bat Hawks nests in South Africa are often found in high eucalyptus trees in which they also frequently roost. Egg-laying is mainly from August to February, but it peaks from September to October. 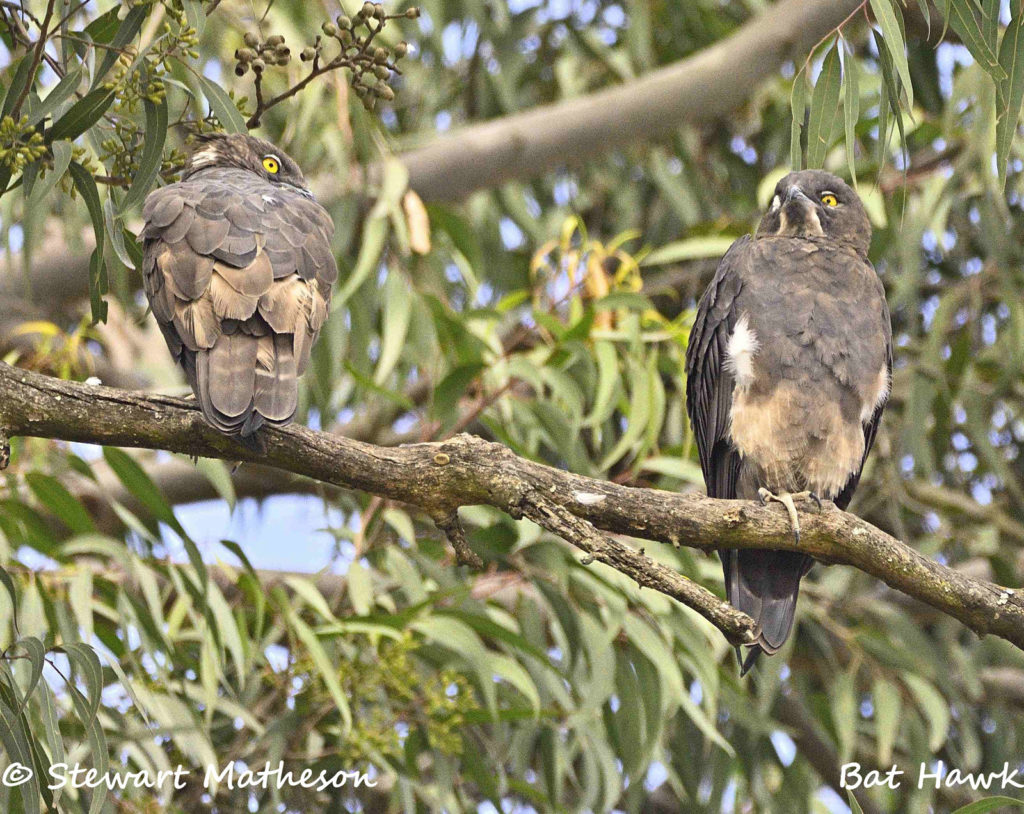 More about the earlier history...

Roy Sarkin has has been observing the White River Bat Hawks for a long  time:

“We saw our first Bat Hawk in our garden on the Plaston Road in a dead tree on the morning of 19/1/97, and it flew in a westerly direction. Afterwards we heard that Bat Hawks had been seen at another spot outside town. We went to sit there at dusk and they flew over us going north. We started looking for their roosting / nesting tree, including around Ezigro Nursery. I spotted a tree near the river that had a nest in the right place and when we looked with binos there was a Bat Hawk sitting incubating an egg. That was in about 1998. When they deserted that nest, the birds landed up at the Mosque in town. When that tree was felled they moved to the Potts’ property. After that they landed up at the co-op nest which was a perfect site. The owner promised to look after them, but they built built a fire round the tree and destroyed it. The Bat Hawks then moved to the present site. I only ever saw one chick, which was at the co-op site.”

WESSA Lowveld aims to gain a better understanding of the population and habitat viability of Bat Hawks in the region which could lead to a biological management plan for the species. The public is encouraged to forward sightings of Bat Hawks and in particular other Bat Hawk nests in order to deduce estimates of the regional population. Tracking of juveniles may also yield valuable information about juvenile dispersal and movements.